Seventh Sanctum
Lost in Translation 139 – Are We in a Cycle?
Posted on October 24, 2015 by Scott Delahunt

During a discussion with Steve, the question whether there is a cycle happening, one first started in the Fifties.  During the History of Adaptations, the Fifties were discovered to have a low number of original works, something that the Aughts shared.  The Fifties also had a number of movie remakes, something the New Teens is seeing.

With the movies remade in the Fifties, the new versions took advantage of the change in filming technology.  The Ten Commandments and Ben Hur: A Tale of Christ were both black and white silent films when they were released in the Twenties.  Their remakes in the Fifties took advantage of the major advances in movie making – sound and colour.  With both films being period pieces, nothing on screen needed to be changed beyond what was essential for the new technologies and grander scales available.  The spectacle of both epics were enough to draw in the younger audience while those who saw the originals could see them again with the new dimensions of full colour and sound.  Thirty years made a huge difference in the film industry.

Fast forward to now.  The entertainment news is filled with remakes.  Just from the older news posts for Lost in Translation, I get the following list:
Jem and the Holograms
The Equalizer
Ghostbusters
Predator
Indiana Jones
Blade Runner
Big Trouble in Little China

That doesn’t include films like 21 Jump Street, remaking a TV series, and all the Ninties movies being remade like Stargate.  Again, the difference is thirty years.  The advances in film technology aren’t as obvious,  though.  The use of computers for special effects has grown over time, but not all the works being remade will benefit from the advance outside the budget.  Cecil B. De Mille remade The Ten Commandments because of the sound and colour.  The movies listed above and the others are being done because of nostalgia.

It’s the thirty years that raised the question.  Thirty years is enough time for a young man to work through the system to get to the point where he can make decisions on what to film.  Thirty years ago was 1985, the middle of the decade with the most original popular works made.  The chart from last week may help here. 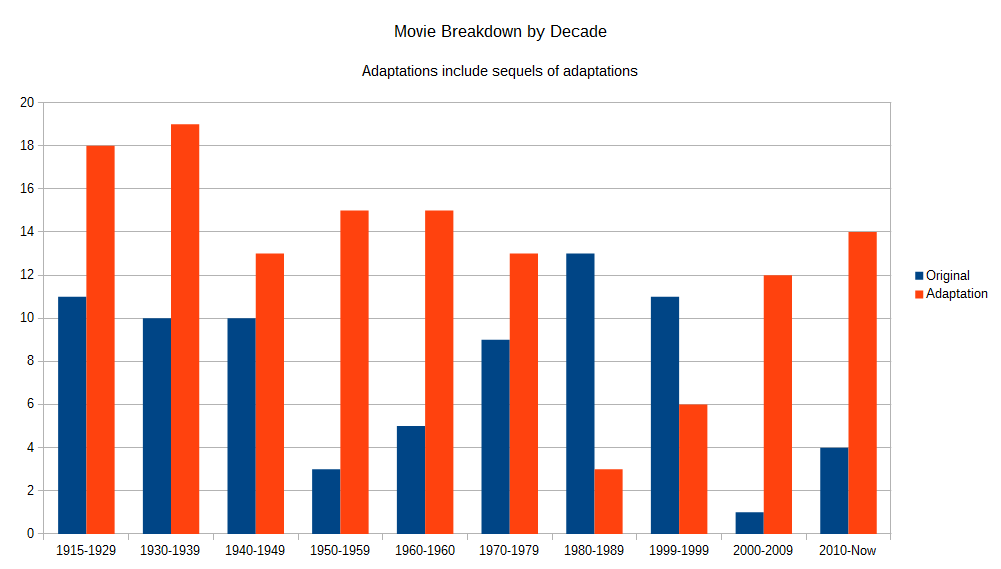 As pointed out last week, part of the issue with the complaints about adaptations is that the Eighties and Nineties, where the original works outnumber the adaptations, were anomalous.  Today, if someone wanted to watch a movie from the Eighties, it’s not difficult.  Between television reruns, home video and online streaming, chances are good that a movie from the Eighties is available.  In the Fifties, those options weren’t available.  Movies from Hollywood’s early years might make an appearance on television or appear at repertory cinemas, but the ease of finding them did not exist like it does today.

Is there a cycle restarting?  It’s hard to tell.  There isn’t enough data yet to make that call.  The chart above shows that the New Teens are behaving in a similar manner to the Sixties, but this decade is only half over.  A backlash against adaptations is building, but, again, the Eighties and Nineties were exceptions, not the norm, when it comes to original works.  It is something to keep an eye on, though.  If a cycle is repeating, noting the speed at which the elements appear helps work out how long a given segment will last.