Seventh Sanctum
Way With Worlds: Without Words
Posted on May 1, 2015 by Steven Savage 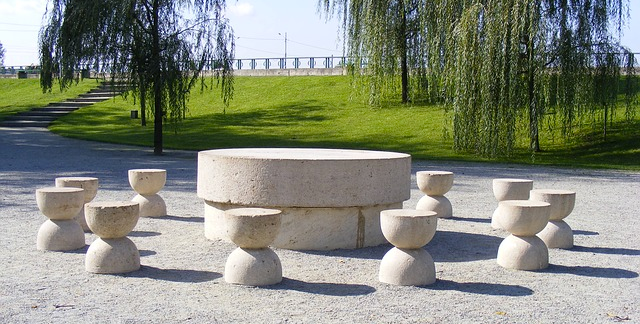 So having discussed TMI and the danger of infodumps, let’s ask a bit more about how you can communicate your world without everyone talking about it.

Or reading about it.

Or listening to a newscast

It’s easy in a game or story or what have you to try and tell people about the world by having characters do it. By speech or by writing or by The Exposition Channel, it’s easy to resort to the words of characters to fill people in. We’re used to talking to people, and sometimes we talk to our audience through people.

It’s infodumps in any way shape or form. Sure it might be an infodump wearing a funny hat, but an info dump it is.

Which of course is obvious as hell and instantly takes people out of the immersion. When you, the author, the worldbuilder, resort to an info dump it’s obviously “you” doing it. You’re about as concealed as a cartoon character hiding behind a tiny tree. Wile E. Coyote is not your role model, my dear worldbuilder.

So I’d like to cover ways you can tell people about the world without resorting to doing the grenade-fishing equivalent of information sharing. Many of these are things that you should be doing anyway, but we often forget them. Done right, they communicate a rich amount of information.

These methods can be extra powerful because they aren’t always consciously understood by the reader. They’re background detail, little things, but they can add up. When they do (consciously or not) people are really drawn into a world because it all just makes sense.

The reader or player may even get a tiny thrill of figuring it out – but really you set the stage for them to do it.

Imagine a character who stammers as they discuss something – indicating fear (and the reason for which may become clear). Think of a giant futuristic megalopolis where the air smells unnaturally clean (which tells you it’s over-processed or hints that something is wrong). A battlefield-turned-charnel house tells you of not just a battle lost, but of one lost so badly no one is retrieving bodies for some reason (say the war has moved on and is intense).

So much happens without someone explaining it. So much without newscasts and walls of text and four-page speeches.

The unsaid may even emphasize things everyone knows. Mark Ruffalo’s twitchy, troubled Bruce Banner in The Avengers, a living raw nerve, said more about the character than any exposition. We know he’s the Hulk – he made us understand what it was like to live with The Other Guy waiting to come out.

Blushing, looking around, twitching, pacing. Wordless actions by characters say so much about them. In turn they can say a lot about the world.

If travelers to a particular town always seem tired, or are thought of as “always exhausted’ by a character, we know the journey there is always grueling. If a character nervously waves off a subject we know something makes them uncomfortable – and that may tell us something is up. If people are in a rush to get through a checkout, there’s a reason – and soon we find out a hurricane is approaching in the story.

If you’re designing non-human races, be aware of these kinds of communication as well. An alien’s tentacles may twitch when he’s nervous, or a fish-person’s gills turn blue when he’s embarrassed. Learning these involuntary actions can even be a vital part of some stories for the characters and the audience.

We’ve heard the term “speaking with our hands,” and if you think about it, gestures can play an enormous part of communications. Peace signs, shaking hands, putting a finger to one’s lips to indicate silence, winking knowingly – all forms of communication. Just think of many internet conversations would be easier if you could see someone’s expression and gestures (even if said gesture is a middle finger)

However these don’t use words. Characters gesturing or pointing things out is a great way to make a point (so to speak) and not talk about it. You can go into detail how a city block has great food – or you can have a character, when asked what’s the best restauraunt gesture helplessly around because it’s all good.

Food is the fuel for sentient beings. Without it (in whatever form) they’re dead, and you don’t have much of a story except, perhaps, in the afterlife.

But food also says enormous things about culture, people, how they live. A simple description of a meal, how it’s gotten, how it smells, what’s in it, can say an enormous amount.

If your sword-wielding fantasy adventurer has six vegetarian meals in a town then you may realize that’s part of the culture. A character used to delicacies may balk at simpler fare they’ve never seen before (telling you a lot about them). Endless farmland surrounding a town tells you about the economy, how people eat, and perhaps even the politics (read about the Japanese Edo period to see a shining example)

As a personal example, I do a lot of my own cooking and eat healthy and natural. It means my kitchen is often a bit disordered, you can usually smell spices, and there’s usually a few unused pickling or storage jars as I cycle through experiments. But describe my kitchen and you’d get a half an idea of how I eat and learn a lot about me without ever talking about me.

Cultures are about the exchange of things. As cells exchange materials, so do people, keeping the organism of society going.

Economics may indeed be the dismal science, but it’s a fantastic thing to help you describe the world.

Rich clothes and poorly kept building. Piles of coins and zeroes in a bank account. Shortages and surpluses. The signs of economic activity can say an incredible about of things without anyone having to tell you. A comment, the need to protect a vital shipment of materials, some poor-quality food at a high price all say something.

The economics in your tales and games will say a lot about the world.

Clothes say a lot. Maybe you can’t judge a book by its cover, but clothes communicate a lot. A smartly-pressed business suit can tell someone you’re a professional (of what sort may be a question, admittedly). Casual clothes may say you don’t care or that you’re relaxing. A soldier’s uniform communicates a great deal about him or her, especially if its formal with a display of medals.

How characters dress can say a lot, and how populations say a lot. Working that into descriptions or character designs says things without using words (or many words).

Pencils and pens, weapons and cars, all of them say something about a world – without you having to explain too much.

Imagine if you have a fantasy world, but the roads are covered with “autocoaches, and the infernal glow of their storage globes.” You just explained you have a world of magical transport and even hinted that they’ve got glowing fuel tanks in a few words.

Or think of a world that’s like ours. A personal computer in’t unusual – a lack of one may be. If everyone seems to use a bicycle you’e just said a lot about the culture and economy. If everyone uses cash and not a credit card you’ve said something.

Things that people use everyday tell you about the world.

Now the sense of what artifacts mean can change with time and reference so you have to be aware of your current and future audience. But artifacts tell a lot.

What your world is made of, how it is made, says a great deal about it.

Think of how the world around you is built. Materials have to be shipped, workers do work, systems maintained. Roads are built for reasons. Architecture is engineering and history and science and art all in one, a building speaking to a given style or given economic limits or benefits.

It says a lot about a culture or a people or a person without you having to explain it directly.

Soaring towers speak of some effort of construction. Simple hovels could mean poverty – or a hermit’s simple dwelling. Decay can be a sign of poverty or war, shining brass of careful upkeep or pretension. A paved road replaced with gravel tells you of a decline in the economy.

Architecture is the part of your setting heavily engineered by characters, so it says a lot about who they are/were, their situation, and their world.

So here’s something to help you out. Think of the most important elements of your world that your audience has GOT to understand. List about 5 of them.

Now in the above categories (Expressions, Gestures, Cuisine, Economics, Clothes, Artifacts, and Architecture) ask how you could communicate those traits without explaining the meaning directly to your audience.

This kind of exercise is greta practice – in fact I bet you can think up plenty of categories I missed to try and communicate your world.

Good luck with communicating your world – and learning how to shut up so you can speak!