Spunky girl detectives can be traced back to one source – Nancy Drew.  The character first appeared in 1930 with the publication of The Secret of the Old Clock, sending the titian-haired sleuth into fame.  The original Nancy Drew Mystery Stories series ran for 175 books from 1930 until 2003, with more books under new series since  then, along with a series of video games from Her Interactive.

Nancy plies her trade as an amateur sleuth in the fictional town of River Heights, where she lives with her lawyer father, Carson Drew, and their housekeeper, Hannah Gruen.  Nancy’s mother died long before her adventures started, leaving Hannah in the role of a surrogate mother.  Carson’s work leaves him away from home for extended periods, giving Nancy a sense of independence that allows her to investigate.  However, Nancy isn’t alone.  She has her cousins, the feminine Bess Marvin and the tomboy George Fayne, and her beau, Ned Nickerson, along to help her.  Nancy is self-sufficient, capable of not only getting into trouble but getting herself out on her own.

Behind the scenes, the Nancy Drew Mystery Stories was created as the distaff side for the Hardy Boys for the Stratemeyer Syndicate.  Ghostwriters using the pen name Carolyn Keene wrote the stories based on plot outlines created by Edward Stratemeyer and his daughters.  The early years saw new books published four times a year; these releases were always anticipated and sold well.

With a long history, Nancy inevitably would wind up on the silver screen.  Warner Bros. released a series of four movies in 1938 and 1939.  Nancy has also appeared on television, with a series in 1977 starring Pamela Sue Martin.  Hollywood is attracted to popular characters, and Nancy Drew has maintained her popularity over the years since her first appearance.

With such a long history, adapting the character poses some problems.  The biggest is the changes in culture since 1930.  The racism of the Thirties just does not fly today.  The expectations of young women have changed.  No longer are teenaged girls expected to go to college to get degrees in Home Economics; instead, women are breaking through barriers in all walks of life.  An adaptation would have to work out how to balance what is acceptable in entertainment today while still keeping the core of the character. 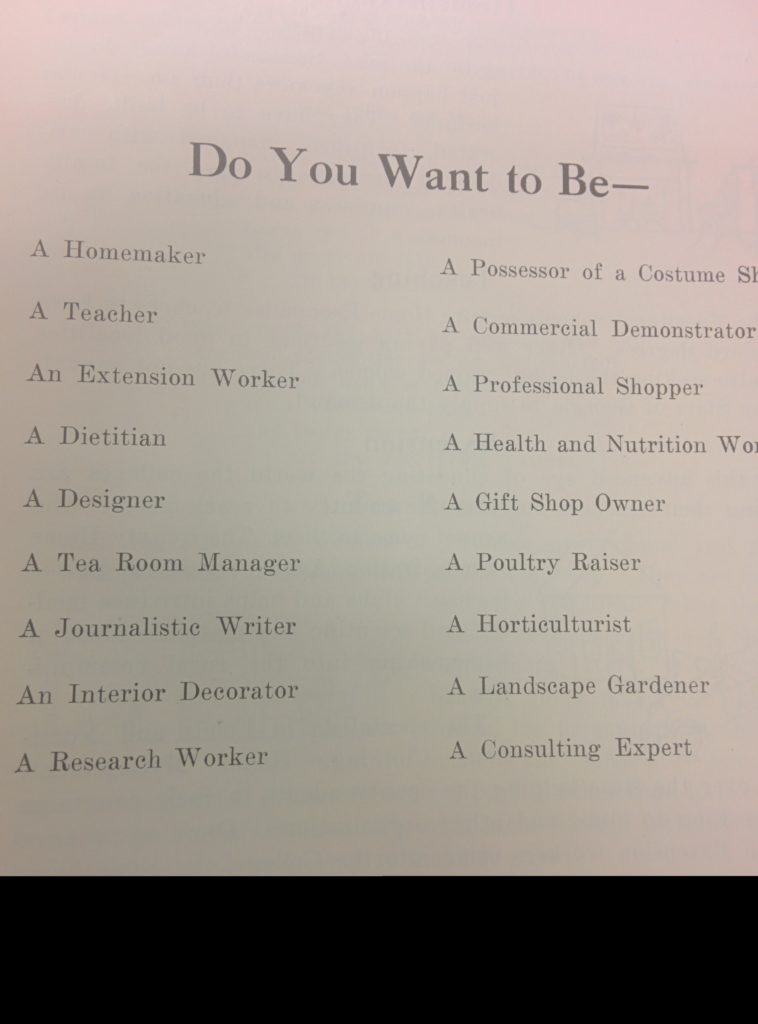 Welcome to a woman’s destiny in 1924, via the Georgia State College of Agriculture bulletin, “What Women Can Do”.

With this in mind, it’s time to look at the 2007 adaptation by Warner Bros, simply titled Nancy Drew.  The movie starred Emma Roberts as the titian haired sleuth, with Tate Donovan as Carson Drew and Max Theriot as Ned Nickerson.  The story starts in River Heights at the tail end of one of Nancy’s cases, inside a church as she talks a pair of crooks into surrendering to the police after they caught her.  The commotion, though not only draws out the town to root for Nancy but also brings Carson out from work, which happened to be in court at the time.  As a result, Carson gets Nancy to promise to no sleuthing while they are in Los Angeles.

However, Carson forgot that Nancy arranged for the housing arrangements in LA.  She found a haunted mansion once owned by the famed actress Delilah Dreycott, who disappeared in mysterious circumstances twenty-five years prior.  The mystery draws Nancy in, despite her promise to her father to not sleuth.  What should be a simple investigation, though, leads to threatening phone calls and the discovery of Delilah’s illegitimate daughter, Jane Brighton, played by Rachel Leigh Cook.  After meeting Jane, Nancy changes the direction of her investigation into finding the late actress’s will to help Jane and her daughter.  As expected, Nancy does get kidnapped after finding the will, but she escapes on her own, and is able to reveal the mastermind behind the plot.

Emma Roberts as Nancy was able to carry the movie on her own, portraying the girl detective as competent and capable.  While her classmates in LA made fun of Nancy’s fashion choices, the look was based on illustrations in the books, updated for today.  Outside Los Angeles, Nancy wouldn’t look too out of place, eccentric but not decades out of date.  The movie’s story was original but used elements from the books, including Nancy’s penchant for getting captured by the villain’s henchmen and for escaping.  The movie also showed Nancy as a capable young woman, independent but still her father’s daughter.  Just as important, Nancy’s hair was titian, not blonde nor brunette.

The movie also tossed in a few Easter eggs for fans.  Several of Delilah’s old films took their names from the Nancy Drew Mystery Stories, including Mystery of the Lilac Inn.  Nancy had a blue ragtop roadster, a Nash Metropolitan, the same colour as it had in the books.  Bess and George made quick appearances at the beginning of the movie while it was still in River Heights, and it was possible to tell the cousins apart just by their clothes.  Ned appears both at the beginning and comes back in the middle of the movie with the roadster.

While the movie wasn’t based on any one book in any of the various Nancy Drew series, it was based on an amalgamation of Nancys through the years, updating her while still keeping her true to her nature.  Nancy Drew was aimed at the same audience that the books are, but made sure that the clues were there to be seen by viewers as well as Nancy herself.  The result is a work that takes pains to bring a character up to date without losing what made her so popular in the first place.