Like the previous two gaming adaptations looked at, Star Wars and Star Trek, today’s is also based on a franchise. Unlike the previous outings, though, Victory Games’ James Bond 007 Role Playing Game, released in 1983, is set in modern times.

007 is an older franchise than either Star Wars or Star Trek, beginning with the release of Casino Royale in 1954, followed by thirteen more books, including two collections of short stories.. After Fleming’s death, other authors continued writing about Bond, including Kingsley Amis, penning Colonel Sun as Robert Markham, and John Gardner. Naturally, Bond’s adventures became popular enough to become adaptation fodder. Casino Royale was the first adapted; the first adaptation of the book was an CBS TV movie featuring “Jimmy Bond” in 1954, followed later by the 1967 parody with Woody Allen, and then in 2006 starring Daniel Craig. The latter was a reboot of the film franchise started by Cubby Broccoli in 1962 with Dr. No. All told, the franchise has seen six actors portraying James Bond, each bringing a different interpretation of the character. 007 has had many imitators, from Matt Helm to Danger!! Death Ray, and has also been the basis of many parodies, including the 1967 Casino Royale, the Austin Powers movies, and the Reboot episode, “Firewall“. Bond is an influence. 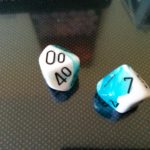 A role-playing game based on a franchise featuring a sole main character may seem odd, but Bond is just one agent of several with a License to Kill. The franchise also has recurring characters, including CIA agent Felix Leiter and fellow MI6 agent, Mary Goodnight. The novel Moonraker mentions agents 008 and 0011, and the film franchise shows agents through to 009. Goodnight represents the lower ranked agents in MI6, allowing for players who want to work towards becoming a 00 agent.

Character creation in James Bond 007 is point-based, as opposed to random dice rolls as seen in Dungeons & Dragons*, allowing for players to create an agent to their taste. The points, the number of which depend on the experience of the character, can be used to buy attributes, skills, and appearance details. The attributes – Strength, Dexterity, Willpower, Perception, and Intelligence – are more or less standard across the majority of tabletop RPGs, and are the base for skills. The twenty-four skills are those seen in the 007 books and movies, from Boating to Gambling to Seduction. Need to outrun a number of SUVs filled with mooks working for the head of a Columbian drug cartel? Driving. Need to shoot at those same mooks? Fire Combat. Need to convince the cartel head that you wanted to get his attention to become one of his lieutenants? Charisma. If a skill doesn’t quite cover what a player wants to do, there’s also the optional Fields of Experience, which provide some flavour on what an agent knows, from being able to ski to understanding a toxicological report on a rare poison. The Primary Chance of a skill is based on one or two attributes plus the number of levels bought for the character.

With the appearance details, the game introduces an interesting concept that works in the context of an espionage RPG – the more average a character is, in height, weight, and looks, the more it costs to buy the appearance. An average looking character is harder to identify, which is handled in the game with Fame points. Fame is further increased depending on the initial experience level; Rookies, like Goodnight, aren’t known while a 00-level agent, like 007, has had missions that have become known. Agent-level, the middle tier covering people like Felix Leiter, may or may not be recognized, but word of their exploits have gotten out. Bond, who is known through out the espionage world, has a high number of Fame points that even dying, as seen in the film adaptation of You Only Live Twice, still doesn’t help avoid recognition. Also affecting Fame is gender; female agents get a reduction because women aren’t as represented as agents as men are; Holly Goodhead, the CIA agent from the Moonraker movie, isn’t recognized by Bond because of this factor.

The core mechanic of the 007 RPG is based on the roll of a percentile die, or d100. However, it’s not a simple pass/fail system. Instead, the game uses Ease Factors ranging from 10, the easiest, to 1/2, the hardest. The Ease Factor is multiplied by a skill’s Primary Chance to determine the Success Chance. When the percentile dice are rolled, the result is checked against the success table, not only to see if the character succeeded, but how well, through the determination of the Quality Rating. The QR ranges from 1, best, to 4, worst but still a success. If the roll was to see if a character hit using Fire Combat, for guns, or Hand-to-Hand Combat, for melee, the Quality determines how much damage is done.

Dice, though, can be fickle. Bond seldom fails when he knows he must succeed. The 007 RPG has one more mechanic that helps, the Hero Point. Today, most games have a hero point or drama point mechanism to help players when needed. Prior to the 007 game’s release, the only hero point mechanism seen was in TSR’s Top Secret, with optional Fame and Fortune points. With 007, the hero point mechanic was part of the core. Players had to declare the use of a Hero Point, though not how many, before rolling. Hero Points improved the Quality Rating by one per point spent. A QR of 1, though, was the best possible, with no further improvements possible**. However, that Hero Point isn’t lost; getting a QR1 gets the player a Hero Point, turning the expenditure into a wash. That does mean that more experienced agents, like 007, will be getting more Hero Points on average than a Rookie, but a 00 will also be facing more challenging opponents. A Rookie shouldn’t be going up against Scaramanga on his or her first mission.

All of the above may seem complex, and the game does front-load the complexity at character creation, but once an agent has been made, the mechanics are easy to use. The provided character sheet includes all the skills and and how to calculate their base chance and even has a multiplication table for Ease Factors. All rolls are based on Ease Factors, giving players an idea of their chance of success. The game includes examples of play that show how the mechanics work using scenes from the movies and books. While the core rulebook doesn’t have room to detail all of 007’s gadgets, the supplement, Q-Manual covers everything that has appeared in the books and movies.

With weapons, vehicles, and gadgets, the core philosophy of the designers was that the character still had to be the focus. Almost every item detailed in either the core rules or the Q Manual provides a Performance Modifier, a bonus or penalty to the the task’s Ease Factor. The only exception is the automatic safecracker from the movie version of On Her Majesty’s Secret Service, a suitcase-sized device that did the work while Bond read a magazine. The Performance Modifiers give the GM room to throw added challenges to players. A chase sequence that’d be too easy with the Q Branch provided Lotus becomes a tense scene when said Lotus explodes and the player needs to borrow a non-player character’s aged Peugeot, as seen in For Your Eyes Only.

All the above discussion about character creation and game mechanics, though, doesn’t answer the main thrust of Lost in Translation – is the game a good adaptation of the source works? The answer – yes. The game’s mechanics were pulled from the books and films. Reading the novels or watching the movies with an eye to seeing the mechanics in action reveals that the rules cover everything that happens. It is possible to see when Bond gets a QR1 result and when he spends a Hero Point. The robustness of the mechanic means that players and GMs can apply them to the 007 films released after the game went out of print. The game’s designers ensured that the rules reflected 007’s exploits.

The only lack that the game has is the hole caused by litigation over Thunderball. EON Productions, the licensors of James Bond, didn’t have the rights for SPECTRE, thus could not grant Victory Games permission to use the organization. Victory Games created a new villainous group to fill in the gap, TAROT, using the organization to fill in SPECTRE-sized hole, particularly in adventure modules based on the older movies. Characters with ties to SPECTRE were transferred to TAROT.

While the James Bond 007 RPG is out of print, and the Avalon Hill Game Company has folded the Victory Games imprint, the game itself is again available. A retro-clone, Classified published by Expeditious Retreat Press, was released in 2013. The game doesn’t have the /007/ license, but the core mechanics will allow for Bond and his contemporaries and successors.
* Point-buy in D&D has been around as an option since second edition AD&D, but was explicitly made so in the third edition.
** Except when using the Gambling skill, depending on the game of chance being played, allowing a player to beat an opponent’s 8 with a 9 in Chemin de Fer or Baccarat or an opponent’s straight flush with a royal flush in Poker.